The Gialos Beach is practically the port beach of the island Ios. It is only a few minutes away from the seaport and there are precisely in the main season, much less people on the beach, as for example on Mylopotas Beach. The beach is very nice and the water invites for a run into it. One of the highlights is when the ferries arrive in the port, because you can see everything from here very well. 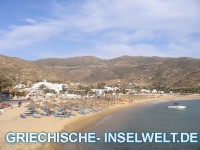 The Mylopotas beach is the main beach of the island of Ios. The beach is from the port and the Chora constantly reachable during the day with the bus. The beach and the water are very good, in the low season.
In the high season, it is very, very full and from noon the party increases. On the beach, there are bars and restaurants, from noon very full and beautiful loud.
At the end of the beach is the "Far Out Camping Club, which is here for years, he was formerly only at the beginning of the beach. Here, from noon all hell broke loose and party people come together by pretty good music to make party right at the pool.
Overall, the beach is in the high season from July to August firmly in the hands of party people, if you don’t want to make party, you are out of place here.
In the low season, it looks very different her